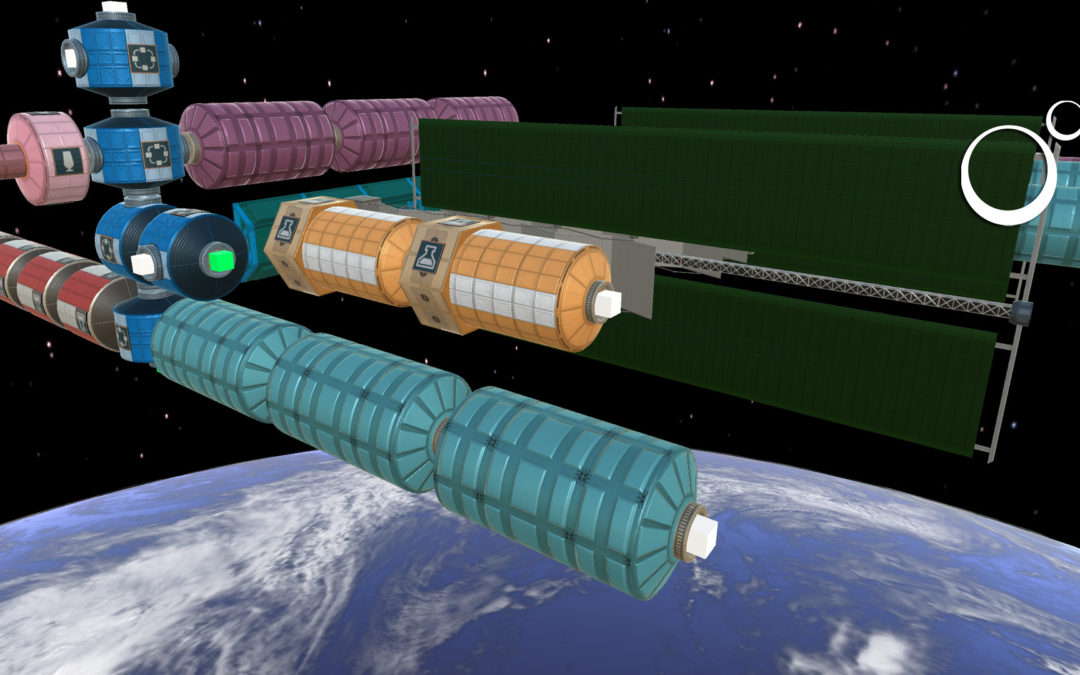 Hello! Finally, we’re back with our first development update since the start of the new year. But first, a belated happy new year from the entire Polar Motion team–we all hope you had a great 2017 so far :-)! Our 2017 was amazing, as we’ve made some steady progress in the development of Space Station Inc., which resulted in a bunch of interesting things to show you.

As we’ve already discussed in our previous development update, since last October we have been focusing on turning the crude UI of the gameplay prototype that we had developed for ‘flat’ platforms into a full-fledged UI featuring final artwork and animations. Moreover, during this period we’re also revisiting certain usability aspects that hadn’t originally been considered during the pre-production phase. In this blog post, we’re going to give an overview of some of the most relevant features we’ve been working on since the last development update and briefly discuss some of the tasks we’re going to be working on in the near future.

For reference purposes, this is what the main screen used to look like back in early December, when we published our last development update: 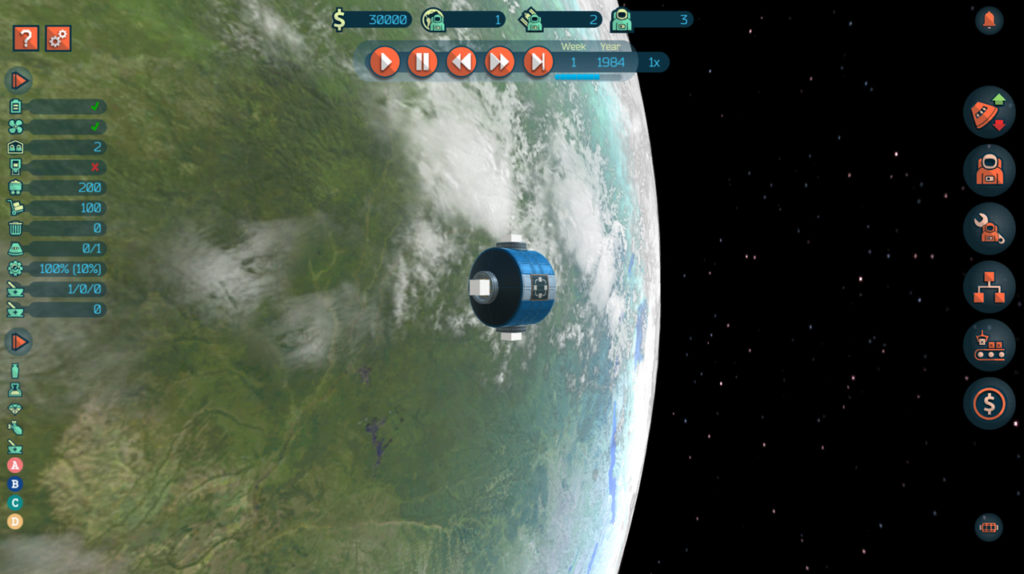 And this is what the main screen looks like nowadays: 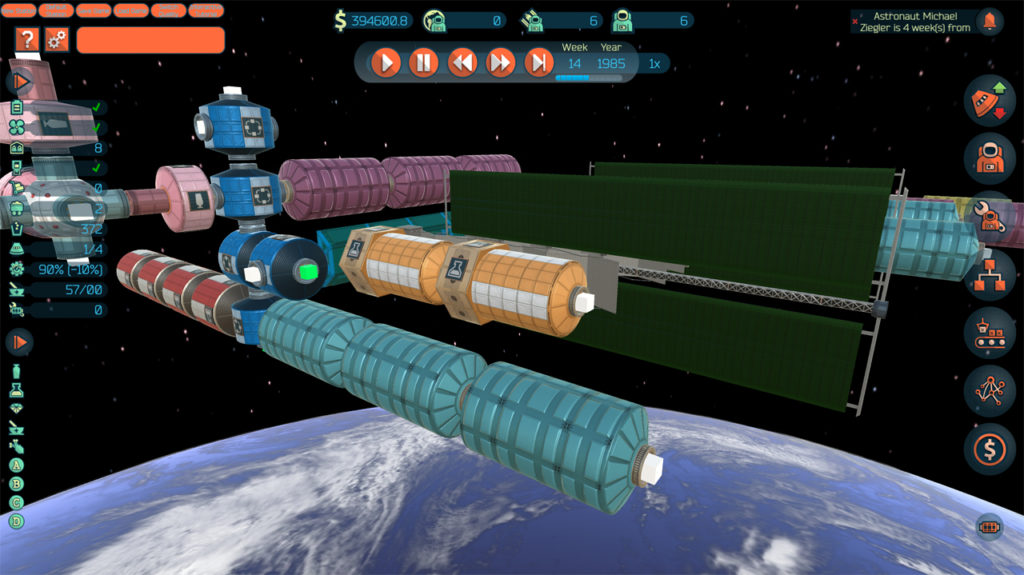 One of the first things you might notice is that we’ve modified the scene so that the Earth is now ‘below’ the space station, which feels a lot more accurate (despite the fact that there’s no concept of ‘up’ and ‘down’ in outer space!). This oversight on my side was spotted by our Lead Artist Mauricio, and it’s a good example on how certain relatively obvious things can be overlooked even if you look at them on a daily basis!

Another feature we’ve been working on is the ‘drag and drop’ functionality. Drag and drop is heavily used throughout the game in order to perform actions such as assigning astronauts to maintenance duties or to a production line. We’ve another blog post lined up where we’ll discuss the process on how we took an existing drag and drop solution from the Unity Asset Store as a starting point and modified it heavily in order to fulfil the specific requirements we have for Space Station Inc.. 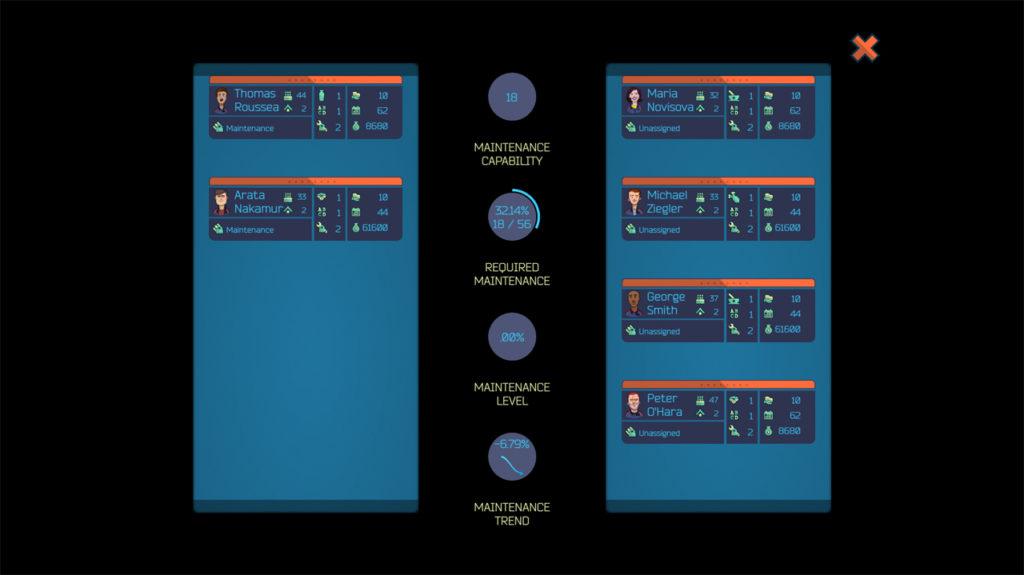 The ‘Maintenance Management’ screen, where astronauts can be assigned in order to monitor the space station and reduce the chances of modules breaking down.

The third piece of functionality we’ve been working on is the ‘Production Lines Management Screen’. Production lines are a key element of Space Station Inc. and, in a nutshell, they allow the player to combine space station modules together in order to boost their combined outputs. In the gameplay prototype we’ve been working on during the Summer of 2016 the management of production lines was spread across multiple screens. Although the system was easy to use, Mauricio realised that there was no need to have that functionality fragmented across multiple screens, so we redesigned the whole system in such a way that all the actions are now performed as part of a single screen. 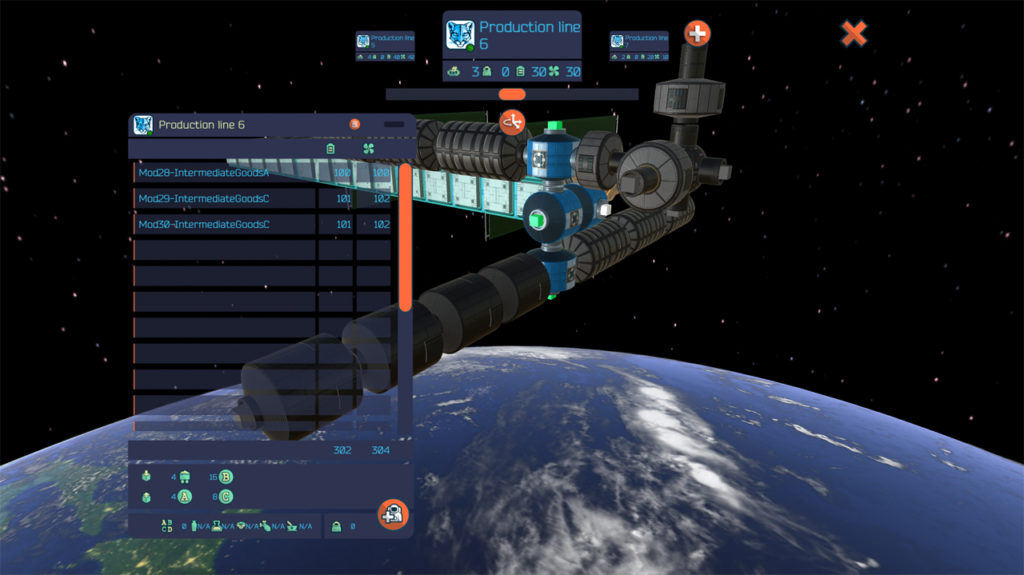 The ‘Production Lines Management’ screen, where players can create and modify production lines.

One interesting aspect of the production lines is that they can be combined together so that their outputs become the inputs of other production lines. This way, the player can set up a customised system in order to ensure that the produced goods are being used in the most efficient way. 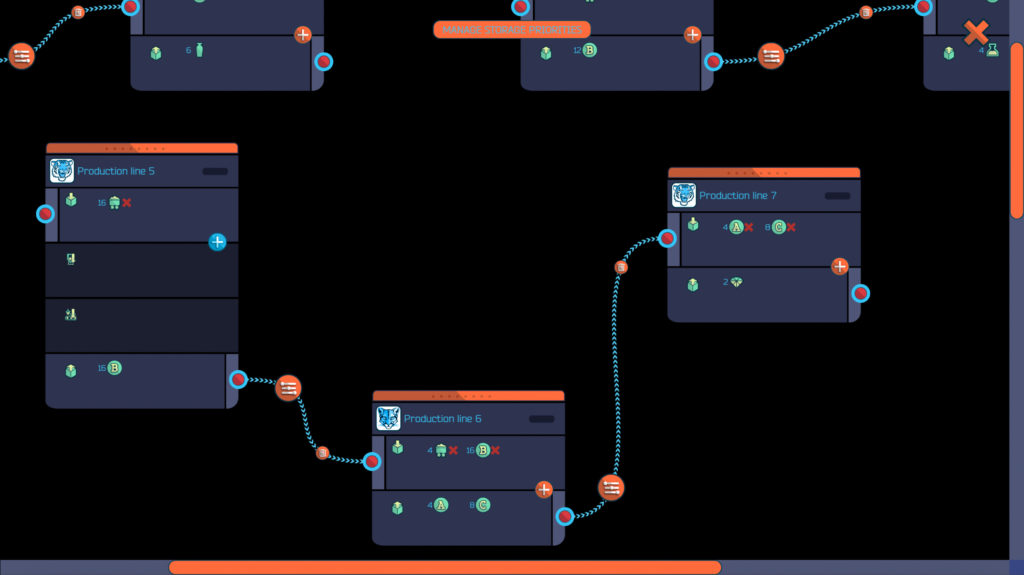 The ‘Supply Flow Control System’ screen is where players can customize the routing of the various outputs from their production lines.

Moreover, the player can also define which production lines have priority when it comes to retrieving their input from the space station’s storage modules by using the ‘Production Lines Priority System’. 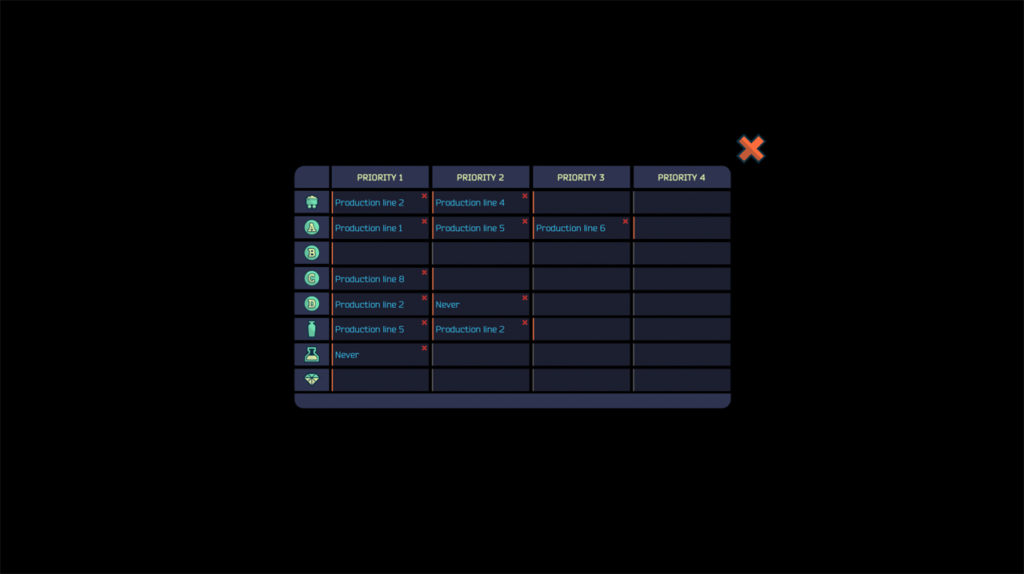 The ‘Production Lines Priority System’ screen is where players can decide which production lines take precedence when it comes to getting their inputs fed from the storage rooms.

Can you run a company whose mission is to keep a fully-functioning space station in Earth orbit without using e-mail? We don’t think so, and that’s why we’ve decided to include a fully featured message system as part of Space Station Inc.. The system works by showing notifications in the main screen the moment they arrive. 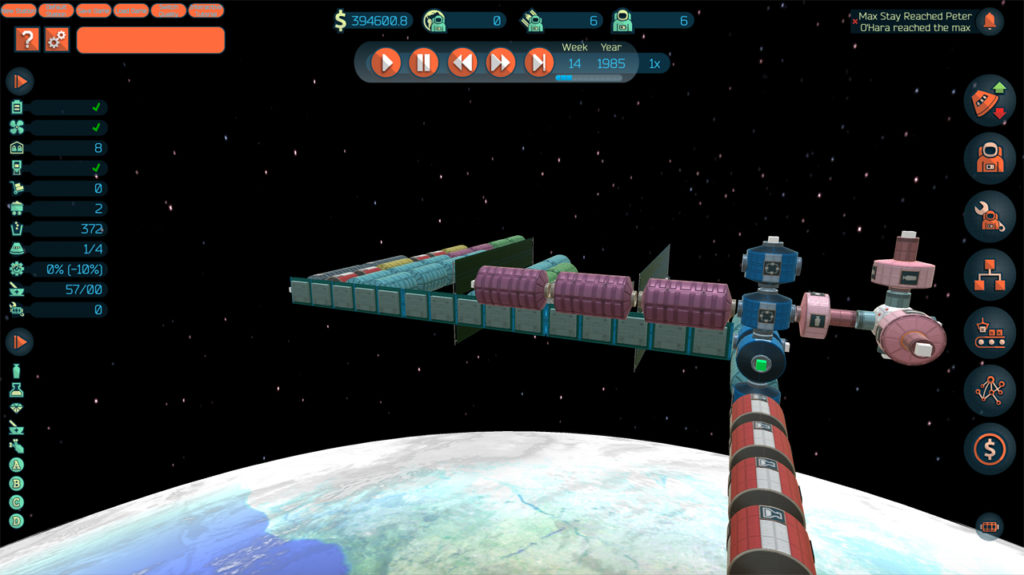 Incoming notification in the top right corner of the screen.

By clicking in the ‘Bell’ icon located in the top-right corner, players can access the message system, which allows them to see their inbox, archive old messages and delete them. 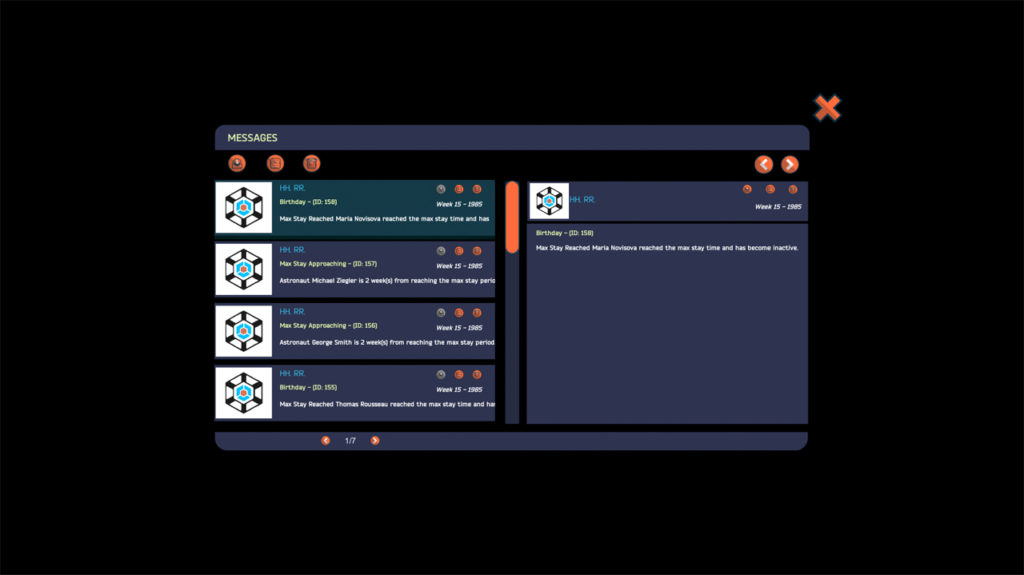 The message system, where players can review past notifications, archive them and delete them.

In the art front, our artist Stefano has been busy at work producing the various astronauts portraits. He’s done more than fifty so far, some of them inspired by members of the development team as well as our friends and relatives. We really like their style and the way they seamlessly blend with the rest of the elements of the game!

Some of the astronauts that will be available in ‘Space Station Inc.’

As you might have noticed from the screenshot we posted at the beginning of this entry, the UI of Space Station Inc. is quite rich and features many elements. We’ve made a big effort in order to simplify and streamline the experience as much as we could but, given the complexity of the game and the amount of information that the player needs to know in order to be able to make good decisions, having lots of elements on the screen is simply unavoidable. We’ve spent a significant amount of time in order to come up with various icons for each element of the game but, despite our best efforts, we realise that memorizing all of them might take a while, so we have already started integrating a tooltip solution into the game. Tooltips will also be the building block of the interactive tutorial system, which has already been designed but we have yet to implement. 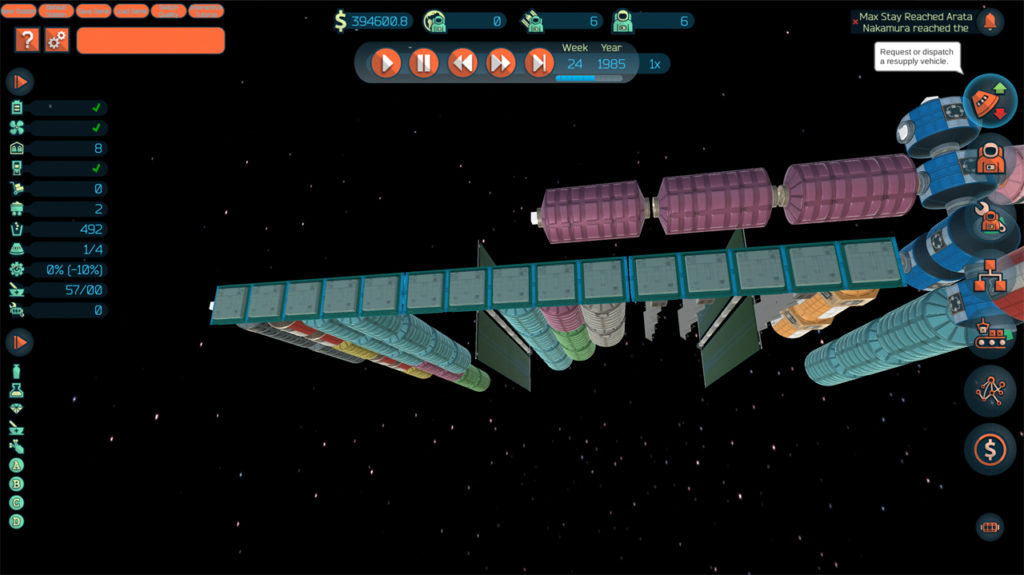 An in-game tooltip in action in the top-right corner of the screen.

The last element we’re going to cover in this development update is the main menu. Up until now, the whole game was contained in a single Unity scene named ‘GameplayPrototype.unity’. By launching the game executable (or pressing the ‘Play’ button in the Unity editor), the game would start up right away and show the initial space station, which was comprised by a single ‘core’ module. By using the buttons located in the top left corner, the player was able to load a saved station from the only save slot supported. Since we’re getting close to the point where we want to perform some playtesting sessions with people that are not part of the development team, we thought this was a good excuse to implement the functionality required for the main menu. We’re going to need one eventually, so we might as well do it now 🙂

For the main menu, we decided to go for an approach that allows players to resume their last game at the exact same point where they left it. Thus, the first time players launch Space Station Inc., they will be greeted by the following screen: 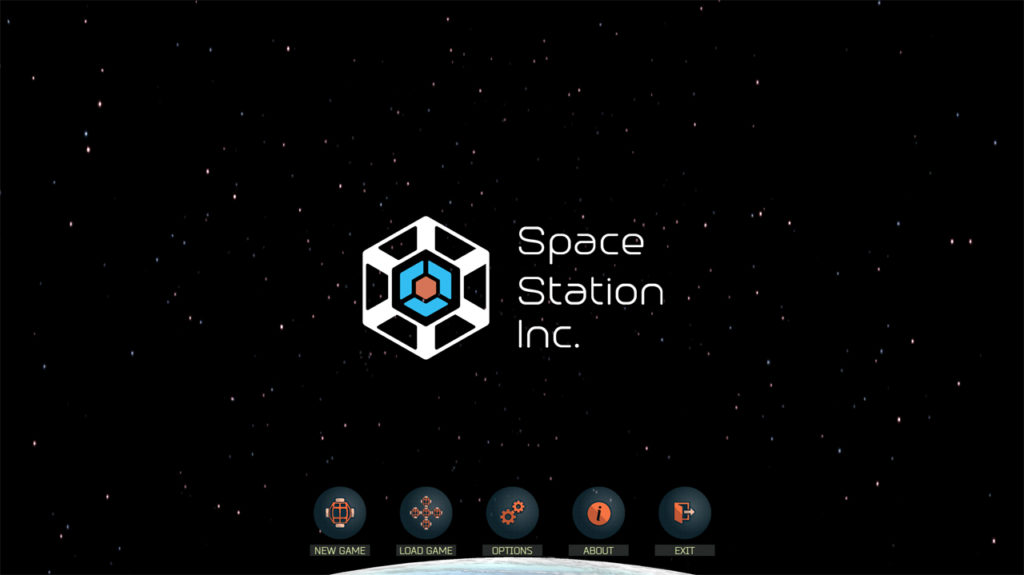 The ‘Main Menu’ screen, as shown the first time the game is started.

After playing for a while, the station evolves and might end up looking like the one shown here: 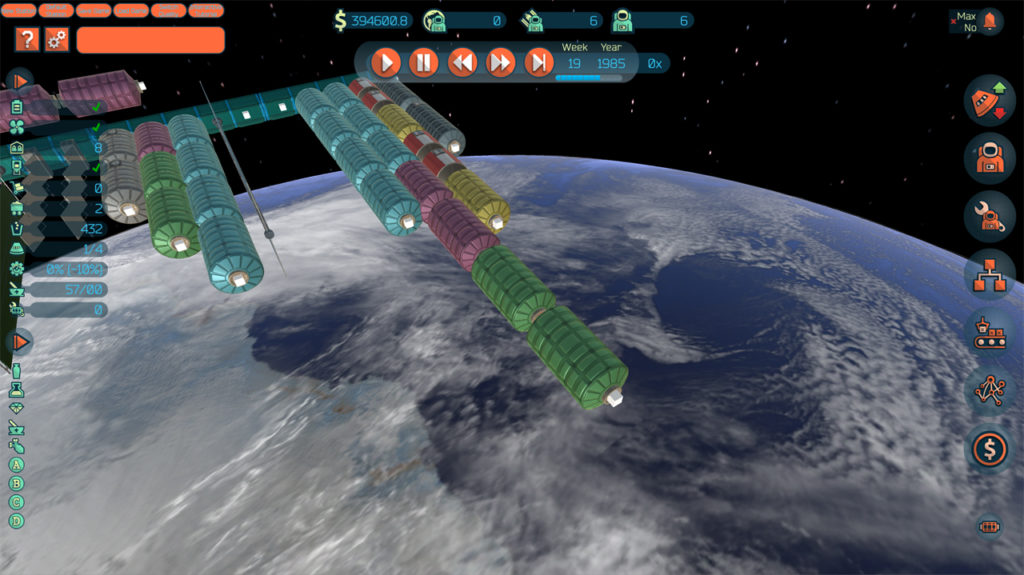 If the players leaves the game at this point, the next time the game is started the main menu is going to look as follows: 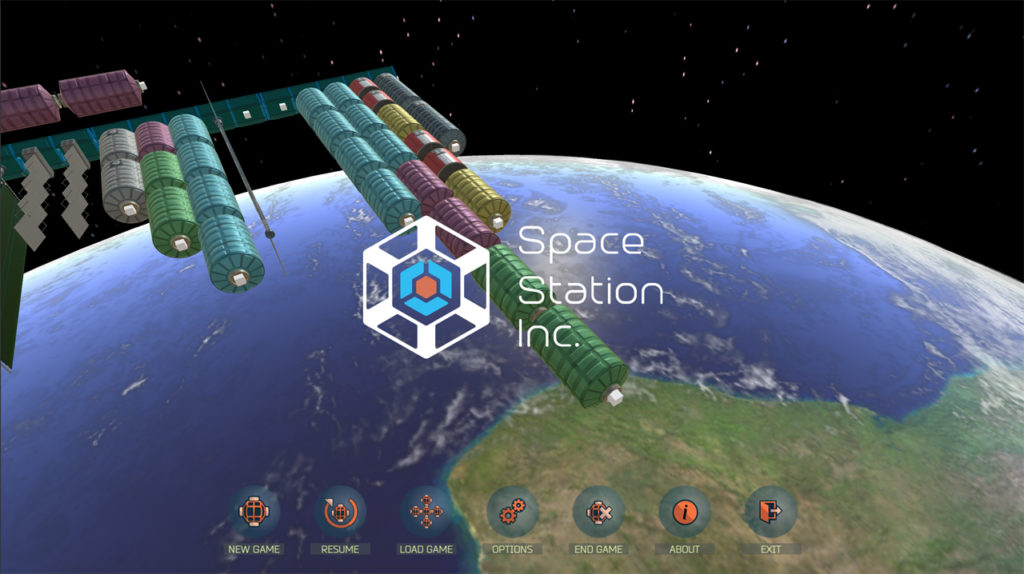 Going from the game back to the main menu.

By clicking on the ‘Resume’ button, the game starts again at the exact same point where it was left: 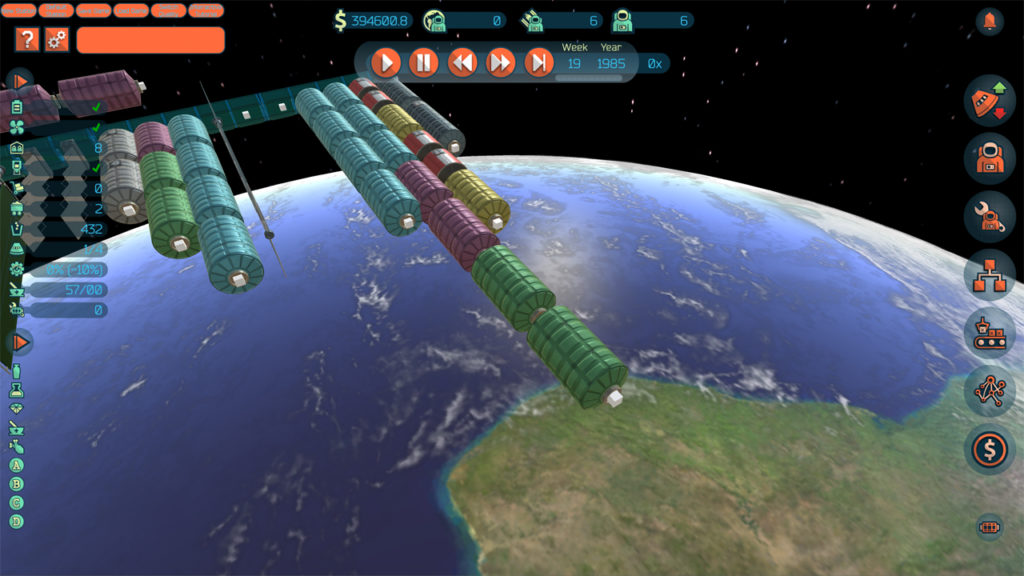 We’re very happy with the progress we have made so far, but we’re aware that we still have a lot of work ahead of us 🙂 The upcoming weeks will find us busy working on some of the remaining features such as the screens for loading and saving games, the module repair minigame and the screens for filling incoming and outgoing resupply vehicles. We’re also writing several blog entries about Space Station Inc.’s game mechanics and performing some experiments on a new art style for the space station modules. Keep an eye on our Twitter account in order to make sure you’re not missing any of our updates 😉 See you next time!