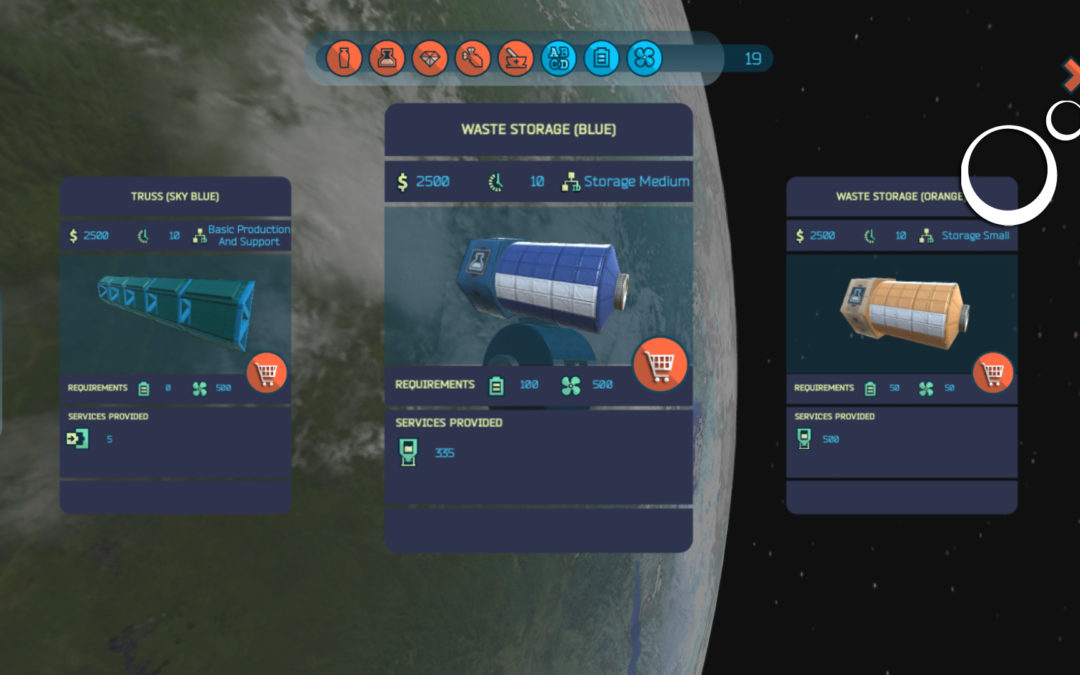 Hello again, welcome back! We’ve made quite a lot of progress since the announcement of ‘Space Station Inc.’, and in this blog post I’d like to share some of the features and improvements we’ve been working on.

When we announced the game at the end of October, we had a working prototype that targeted both ‘VR’ and ‘flat’ platforms. In VR, players were able to move around the station and attach new modules, whereas in ‘flat’ mode they could do that, along with recruiting astronauts, managing them, requesting resupply missions, creating production lines and selling commercial goods in the market. Since the focus on the development of the ‘flat’ version was to get the core game mechanics working, we didn’t spend a lot of time resources making the UI ‘pretty’. For reference purposes, this is how the game looked like back then: 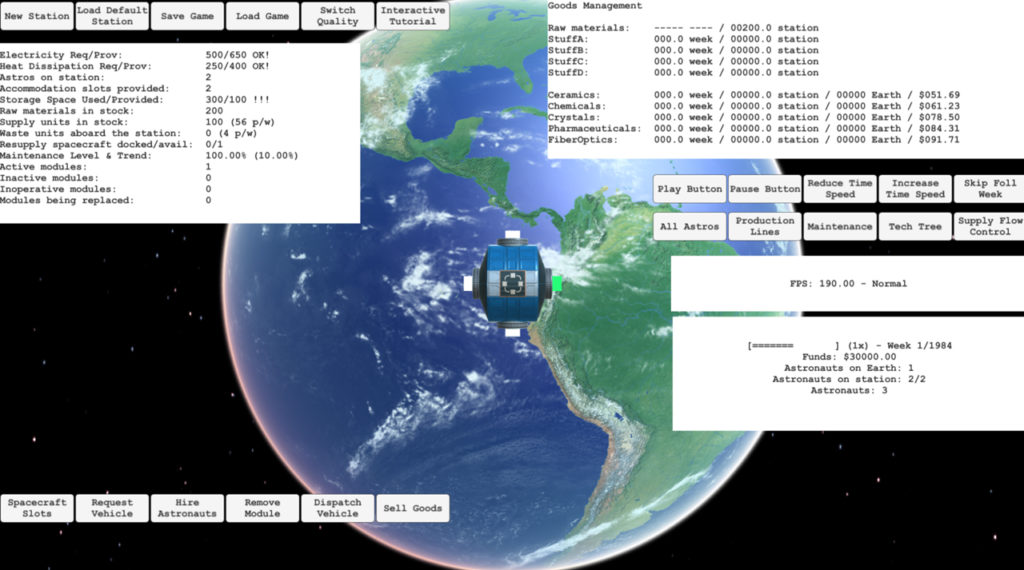 Far from visually appealing, I know 🙂 Beauty aside, by focusing on the gameplay we were able to come up with a working prototype sooner, which allowed us to validate the core concept behind the game and find out if the various mechanics we came up with interacted well with each other when combined together.

After the prototype was complete, Sebastian took it out for a spin. His verdict: “It’s pretty fun! But we need to add more things for the player to do”. Sebastian has a lot of experience analyzing games, so this was very reassuring: we had a solid foundation that we could start building on top of. If the game was fun to play even on its current state, replacing its white buttons and black fonts with a colourful set of widgets could only make it better. This took place sometime in late July. After that, Sebastian went back to the drawing board in order to come up with a new set of mechanics (we’ll be discussing these new mechanics in future entries), whereas Mauricio and myself went back to our keyboards and focused on getting a VR prototype version ready and optimizing the codebase and the 3D models so that they scale well for big stations.

As we’ve discussed in a previous blog entry, we’re advancing the development of ‘Space Station Inc.’ in multiple fronts. Targeting more than one platform is a lot more challenging from a technical point of view, and a member of the ‘Buzz Aldrin’s Space Program Manager’ community asked me via e-mail why didn’t we just focus on desktop platforms only. While focusing on desktop would certainly allow us to finish the development sooner, the subject matter of ‘Space Station Inc.’ and the way the player interacts with the station makes it very appealing for VR devices, and that’s why I’ve decided supporting multiple disparate platforms is worth the effort. The VR market is still relatively small, so our bet may or may not pay off in the end, but it’s well worth the try 🙂

As mentioned before, when we announced the game we already had a working prototype version for VR (you can see a brief in-game video here) and a gameplay prototype for ‘flat’ platforms featuring a very simple UI. The focus during the last six weeks has been on turning the UI from a set of placeholder graphics into something more appealing. This involved lengthy meetings between Mauricio and myself (and sometimes Stefano) every weekend in order to discuss implementation details. Mauricio and Stefano would usually provide some sort of mock-up screen or animation, which I would then use as a guidance when writing the code.

Mock-up animation made by Stefano illustrating the behaviour of the notifications panel.

Mock-up animation made by Stefano with an idea on how the various buttons should behave.

The challenge, as it’s always the case with projects that don’t have an unlimited budget, is how to get good results without sinking a huge amount of time implementing them. After all the discussions held during the last month and a half, I believe we have reached a point where Mauricio understands which types of approaches are less painful for me to write code for, and he’s tailoring the solutions he’s working on at the moment accordingly. We still have a few more months to go before we finish the implementation of the final ‘flat’ version for all the existing game mechanics, but the development is moving along nicely. Here’s what the main screen looks like at the time of this writing: 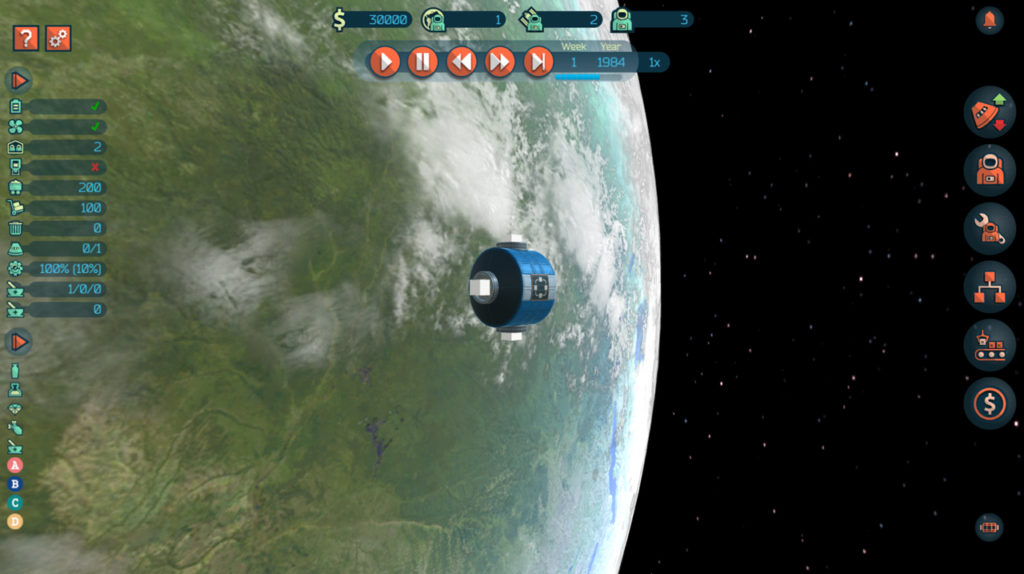 And this is the current implementation of the space station modules purchase screen: 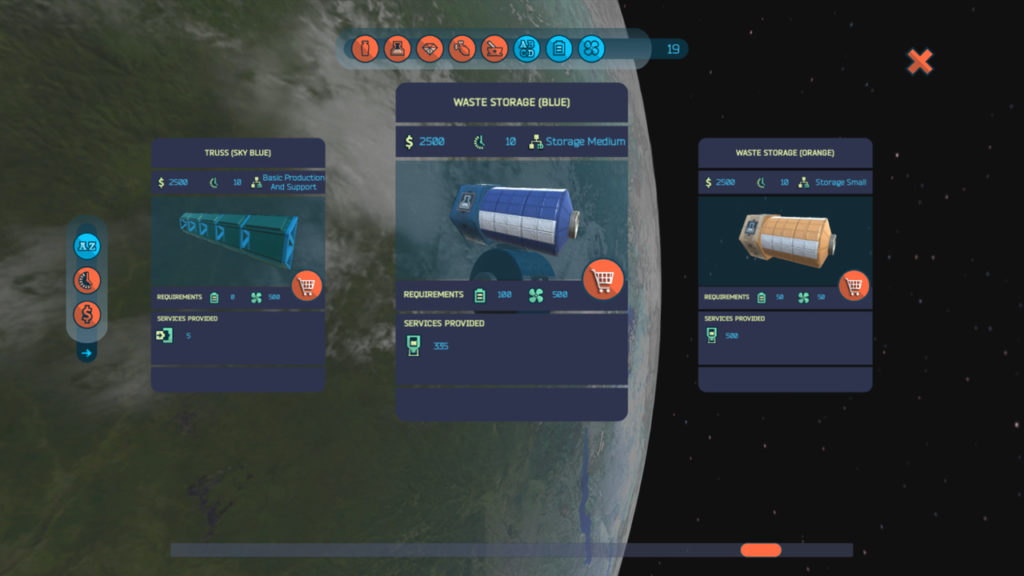 You might have also noticed that the Earth looks different in this new set of screenshots! 🙂 Even though the model we used when the game was announced looked very nice (especially its atmospheric halo!), we found that it was too small. Unfortunately, moving it closer to the camera wasn’t an option due to its resolution level, so we decided to replace it altogether with a higher resolution one. This improvement wasn’t in our roadmap, but it’s one of the various things we end up fixing along the way while working on the game. It only took one Sunday morning to implement and it’s something that players will see all the time, so well worth the investment!

The upcoming weeks will find us busy implementing features such as the notifications inbox, the astronauts recruitment and management screens and the various screens associated to production lines, among other things. We’ll be publishing a new entry in our blog at some point but, in the meantime, if you want to stay up to date with the latest development news of ‘Space Station Inc.’, please follow us on Twitter, where we’ll be posting screenshots and updates on a regular basis. See you next time! 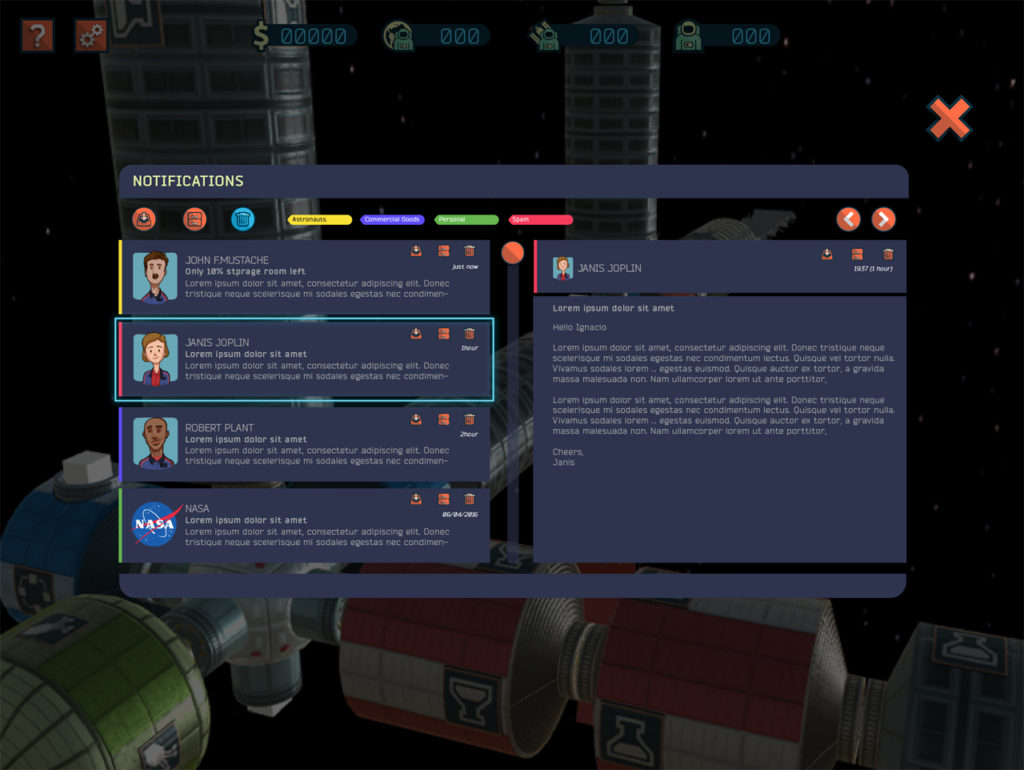 Mock-up screen of the notifications inbox made by Mauricio.